HiPerDuCT takes a number of approaches to achieving more gradual failure. We have grouped these approaches into three broad themes:

The aim of work in this theme is to design and evaluate composite architectures that create ductility via geometrical rearrangement of fibre orientation, matched to tailored matrix characteristics.

For example, it has been successfully demonstrated that using Skyflex™ carbon/epoxy plies of only 0.03 mm thickness, matrix cracking and delamination can be completely suppressed in angle-ply laminates, allowing the fibres to rotate under tensile loading, creating additional strain and pseudo-ductility. Angle plies of (±45) layup can produce strains of over 20% and necking behaviour despite the brittle nature of both the fibres and matrix. There is a trade off in the stresses and strains, but modelling has allowed us to achieve a good balance of properties with thin ply (±25) carbon/epoxy laminates that gave a pseudo-ductile strain of 1.23% and a maximum stress of 927 MPa. Tests involving loading, unloading and then reloading have shown that the initial modulus is fully recovered, and so these laminates may be considered as ductile rather than pseudo-ductile.

Hybrid microbraids have been made by braiding UHMwPE fibres over a unidirectional core of carbon fibres, and their direct use as the reinforcing phase within polymer composites investigated. 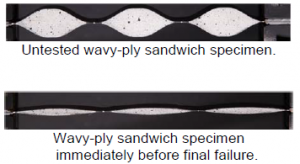 A sandwich structure has been designed, simulated and tested which exhibits large deformations (through unfolding of the wavy composite skins) and high energy-absorption (through crushing of the foam core cells) under tensile loading.

‘Brick and mortar’ composite architectures have been investigated to produce a ductile failure process from either complete yielding of the matrix in the overlap region, or from cracks initiating at the ends and growing in towards the centre of the overlap regions.

An analytical investigation of helical lattice structures demonstrated that pseudo-ductile responses can be obtained.

Interlocking structures have been investigated composed of jigsaw like pieces made of bow-tie shaped elements connected by infill regions. When subjected to tension, the blocks start to slide, generating frictional forces and a non-linear response. 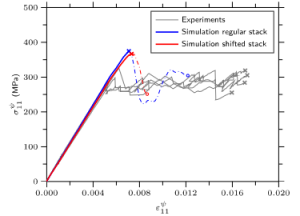 Triaxial braided composites can show a highly non-linear stress-strain response with a pseudo-ductile plateau due to the complex damage behaviour. A meso-scale modelling framework was developed, which showed good correlation with the measured stress-strain curves and damage mechanisms. 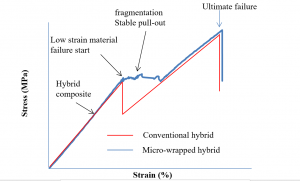 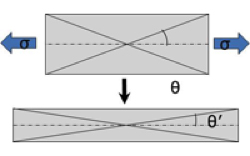 The theme aims to design and evaluate aligned fibre approaches that achieve a ductile or pseudo-ductile response, while maintaining strength and stiffness. This theme explores hybridisation, aligned discontinuous fibre architectures and fibre surface modifications that promote slip at the interface. Some of these approaches are summarised here:

One strategy in this theme involves fragmentation in thin-ply hybrids. Again there is a trade-off between pseudo-ductility and yield stress. A range of different glass-carbon hybrid configurations has been evaluated, and pseudo-ductile strains of up to 2.66% have been obtained with a plateau stress of 520 MPa, or 0.86% pseudo-ductile strain with a plateau stress of over 1300 MPa. Similar responses have also been achieved with carbon-carbon hybrids. However in both cases, loading-unloading-reloading tests show a reduction in initial modulus due to the damage, and so these laminates show pseudo-ductility rather than true ductility.

Ductility via fragmentation in thin angle plies with 0˚ plies

The two previous mechanisms can be combined by replacing the lower modulus glass plies in a glass/carbon hybrid with carbon fibre angle plies. This allows the fragmentation mechanism exhibited by the unidirectional hybrid composites to occur in the 0˚ plies together with the fibre rotation of the angle plies. For example [±265/0]S laminates of Skyflex thin carbon/epoxy gave a pseudo-ductile strain of 2.2%.

Another mechanism for pseudo-ductility is slip at the interfaces between discontinuous fibres or plies. This has been demonstrated in model systems of discontinuous carbon/epoxy prepreg where the plies have been cut through the thickness prior to layup. The effect of ply thickness, cut spacing and alignment on the response have been investigated both numerically and experimentally. For example specimens of IM7/8552 carbon/epoxy with 0.25 mm thick discontinuous ply blocks (0.125 mm for surface plies) and overlap length of about 8 mm were tested and showed significant non-linearity, providing a clear indication of damage, with a modest pseudo-ductile strain of 0.25%. 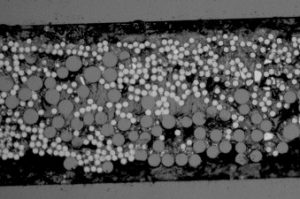 A gas-flow-assisted process was developed to spread and co-mingle fibres and successfully produce hybrid composites. 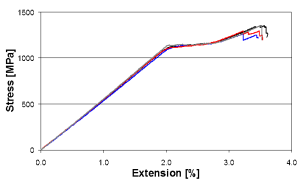 A new failure mechanism of fragmentation in hybrid thin-ply laminates has been demonstrated which gives a pseudo-ductile stress-strain response. This allows load redistribution at stress concentrations, greatly reducing notch sensitivity, and can also be used as a visual overload indicator.

The insertion of tough thermoplastic partial interleaves in a unidirectional discontinuous carbon fibre reinforced composite has been explored. 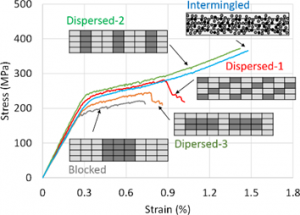 The High Performance Discontinuous Fibre (HiPerDiF) technology allows to produce aligned discontinuous fibre reinforced composites with mechanical properties comparable to those of continuous fibre composite, by exploiting the sudden momentum change of a jet of fibres suspended in water directed in a narrow gap between parallel plates.

Unduloid-reinforcing carbon fibres were produced using controlled laser irradiation which resulted in expanded and ablated regions along the fibre axis. When embedded into a compliant matrix, extensive ploughing from the tapered ends contributed to a ~7 fold increase in work of pull-out. 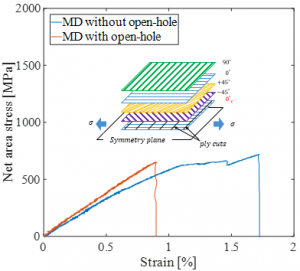 Discontinuous composites across the scales 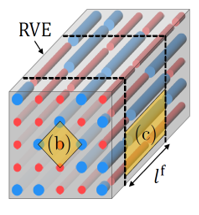 A semi-analytical virtual testing framework was developed to predict the response of aligned discontinuous composites with single and hybrid fibre-types, as produced by the HiPerDiF manufacturing process. This framework can be used to model full specimens (with millions of fibres) within minutes, and its predictions have been compared against experiments. 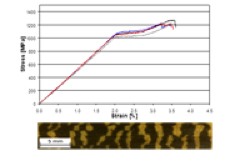 This theme aims to design composite constituents that will enable new mechanisms for ductility, whilst retaining high strength and stiffness. These will ultimately be integrated with novel architectures to produce high performance composites with a ductile response.

One example of this is the work we have undertaken with Cellulose nanocrystals (CNCs). Despite their promise, mechanical properties of CNC/polymer composites, especially in terms of tensile strength and Young’s modulus, have often been limited.

High loadings of water-soluble CNCs were well dispersed in poly vinyl alcohol (PVOH) to form coagulation spinning dopes for composite fibres. The resulting CNC/PVOH composite fibres showed significantly increased yield strength and Young’s modulus for all fibres, compared with PVOH fibres. The 40 wt.% of CNC/PVOH showed the highest Young’s modulus (29.6 ± 4.2 GPa) and tensile strength (0.85 ± 0.06 GPa) with a strain-to-failure of 5.6 ± 0.2 %. The graph shows that incorporation of CNC into the PVOH matrix increased the tensile strength and Young’s modulus, and the PVOH fibre become tougher and more resistant to deformation in the presence of CNC: 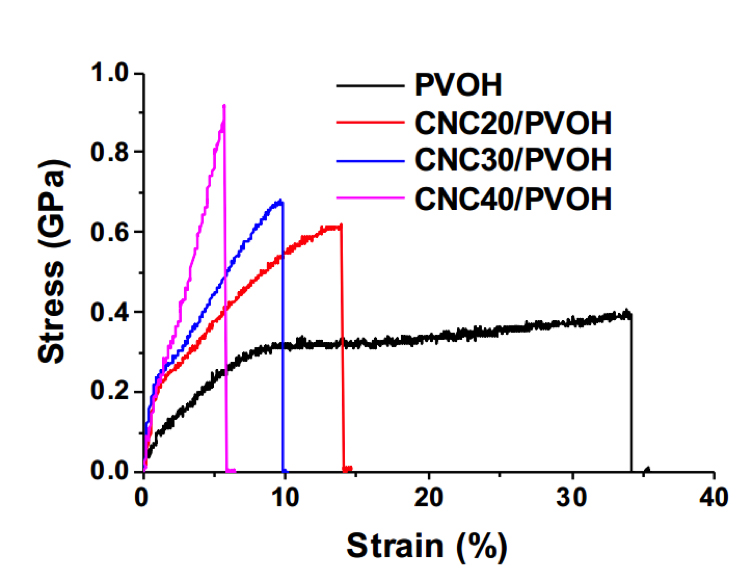 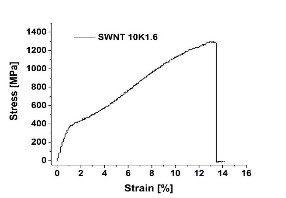 Fibres with a 40 wt% loading of SWCNTs showed a tensile strength of ~1.4 GPa with a strain to failure of 12.7%. Cyclic tests demonstrated excellent ductility. 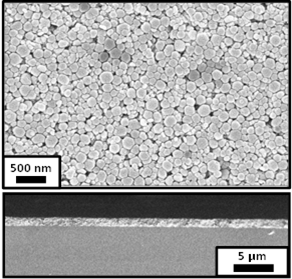 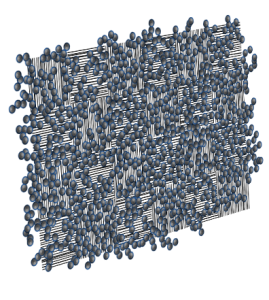 Bi-continuous hybrid aerogel polymer matrices may provide a nano‑reinforcement which both reduces stress concentrations at broken primary fibres and gives a strain hardening response in shear. 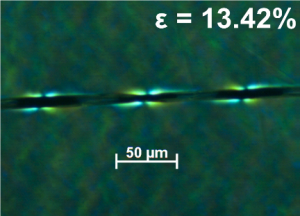 High interfacial shear strength at strains of up to 13% for CNT fibres was successfully demonstrated, offering the potential to create high performance ductile composites. 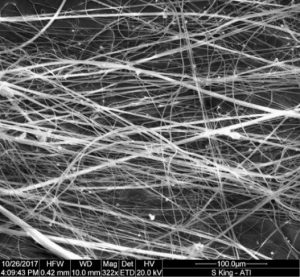 The properties of polybenzimidazole were investigated in fibre form and as a possible matrix. 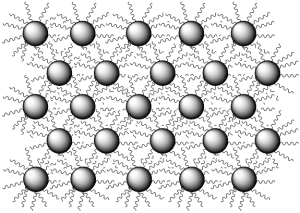 A metal-oxide superlattice was produced that showed a similar stiffness and strength as epoxy but significantly more plastic deformation. 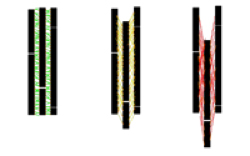